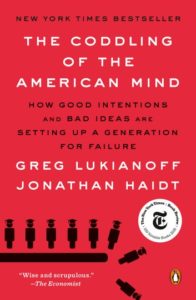 Greg Lukianoff and Jonathan Haidt take an unapologetic and critical view at what they term the three great “untruths” which activists seem to be pushing on the younger generations in the western world: “What doesn’t kill you makes you weaker,” “always trust your feelings,” and “life is a battle between good people and evil people.” Lukianoff and Haidt make a well reasoned and convincing argument that much of the societal progress of the twentieth century is in the process of being undone by these pernicious ideas. Ideas that  seem firmly entrenched in the prevailing social discourse of today and throughout the past decade.

I am not unaware of the highly charged and controversial topics that this book examines: safetyism, anxiety and depression, trigger warnings, identity politics, and the like. However, after taking the time to read it and to watch an accompanying lecture given by Jonathan Haidt, I now believe this book serves as an urgent reminder of some of the great ideological achievements of the western world, and the implications for abandoning them.

Lukianoff & Haidt’s analysis focuses on the American university campus as one of the most illustrative battlegrounds for these “untruths.” They examine the impact of these ideas with intuitive and common-sense arguments, and statistical research. Importantly, this book reasons from first principles of the role of the academy, and provides a prescription for a return to the correct functioning of the institution: The Chicago Statement on Principles of Free Expression. In short, that the university return to its role of serving society primarily through the ongoing testing and competition of all ideas, and not to compromise that role by becoming an undergraduate consumer experience: treating students privileged to attend these institutions as a customer, and thereby compromising this role.

Equally importantly, the book brings with it what I consider to be a far more inspiring message of encouraging individuals to develop resilience, strength, and to overcome the unfair disadvantages, challenges, or discrimination they encounter in their lives, that offence is a normal and healthy part of a university experience, that difficult ideas are the ones that advance the total human understanding of the world and our place in it, and that we would all benefit from a little more humility as an entrant to this important institution. This isn’t to say that society doesn’t have work to do to continuously make good on the cherished western values of equality of opportunity, mutual respect, the equal worth of all human beings, and individual freedoms and responsibilities, but it shifts our focus a little more towards what all of us individually can do to improve our own fortunes and to build a less divisive society.

Greg’s […] theory was this: Students were beginning to demand protection from speech because they had unwittingly learned to employ the very cognitive distortions that CBT tries to correct. Stated simply: Many university students are learning to think in distorted ways, and this increases their likelihood of becoming fragile, anxious, and easily hurt.

Introduction: The Search for Wisdom  |  Link

Our argument is ultimately pragmatic, not moralistic: Whatever your identity, background, or political ideology, you will be happier, healthier, stronger, and more likely to succeed in pursuing your own goals if you do the opposite of what Misoponos advised. That means seeking out challenges (rather than eliminating or avoiding everything that “feels unsafe”), freeing yourself from cognitive distortions (rather than always trusting your initial feelings), and taking a generous view of other people, and looking for nuance (rather than assuming the worst about people within a simplistic us-versus-them morality).

Introduction: The Search for Wisdom  |  Link

A culture that allows the concept of “safety” to creep so far that it equates emotional discomfort with physical danger is a culture that encourages people to systematically protect one another from the very experiences embedded in daily life that they need in order to become strong and healthy.

Chapter 1: The Untruth of Fragility  |  Link

Sages in many societies have converged on the insight that feelings are always compelling, but not always reliable. Often they distort reality, deprive us of insight, and needlessly damage our relationships. Happiness, maturity, and even enlightenment require rejecting the Untruth of Emotional Reasoning and learning instead to question our feelings.

Conversely, if you accidentally say or do something that a member of a group finds offensive, but harbour no dislike or ill will on the basis of group membership, then you are not a bigot, even if you have said something clumsy or insensitive for which an apology is appropriate. A faux pas does not make someone an evil person or an aggressor.

The notion that a university should protect all of its students from ideas that some of them find offensive is a repudiation of the legacy of Socrates, who described himself as the “gadfly” of the Athenian people. He thought it was his job to sting, to disturb, to question, and thereby to provoke his fellow Athenians to think through their current beliefs, and change the ones they could not defend.

In a chilling passage that foreshadows events on some campuses today, Marcuse argued that true democracy might require denying basic rights to people who advocate for conservative causes, or for policies he viewed as aggressive or discriminatory, and that true freedom of thought might require professors to indoctrinate their students[…]

Chapter 3: The Untruth of Us Versus Them  |  Link

Jones then delivered some of the best advice for college students we have ever heard. He rejected the Untruth of Fragility and turned safetyism on its head:

Jones understands antifragility. Jones wants progressive college students to see themselves not as fragile candles but as fires, welcoming the wind by seeking out ideologically different speakers and ideas.

One of the most brilliant features of universities is that, when they are working properly, they are communities of scholars who cancel out one another’s confirmation biases.

Sometimes the left-leaning view turns out to be correct, sometimes it’s the right-leaning view, but on average, students will get closer to the truth if they are exposed to debates among credentialed scholars who approach difficult problems from differing perspectives.

If the telos of a university is truth, then a university that fails to add to humanity’s growing body of knowledge, or that fails to transmit the best of that knowledge to its students, is not a good university. If scholars do not advance the frontiers of knowledge within their disciplines, or if they betray the truth to satisfy other goals (such as accumulating wealth or advancing an ideology), then they are not good scholars. If professors do not pass on to their students a richer understanding of the truth, as it has been discovered in their discipline, along with skills and habits that will make them better able to find the truth after they graduate, then they are not good professors.

The Dalai Lama has long urged such an approach, based on the same social psychology. In May 20187, he tweeted this:

I’m Tibetan, I’m Buddhist and I’m the Dalai Lama, but if I emphasize these differences it sets me apart and raises barriers with other people. What we need to do is to pay more attention to the ways in which we are the same as other people.

Social scientists analyze correlations like this constantly (to the great annoyance of friends and family). They are self-appointed conversation referees, throwing a yellow penalty flag when anyone tries to interpret a correlation as evidence of causation. But a funny thing has been happening in recent years on campus. Nowadays, when someone points to an outcome gap and makes the claim (implicitly or explicitly) that the gap itself is evidence of systemic injustice, social scientists often just nod along with everyone else in the room.

Most people want individuals to be treated well, and they recoil from cases where individuals are treated unfairly in order to bring about some kind of group-level equality.

Developmental psychologists Christina Starmans, Mark Sheskin, and Paul Bloom reviewed the research on fairness in children and concluded that “humans naturally favour fair distributions, not equal ones,” and “when fairness and equality clash, people prefer fair inequality over unfair equality.”

They defined a victimhood culture as having three distinct attributes: First, “individuals and groups display high sensitivity to slight”; second, they “have a tendency to handle conflicts through complaints to third parties”; and third, they “seek to cultivate an image of being victims who deserve assistance.”

Chapter 10: The Bureaucracy of Safetyism  |  Link

Of greatest importance in free play is that it is always voluntary; anyone can quit at any time and disrupt the activity, so children must pay close attention to the needs and concerns of others if they want to keep the game going. They must work out conflicts over fairness on their own; no adult can be called upon to side with one child against another.

We should all take reasonable precautions to protect our children’s physical safety–for example, by owning a fire extinguisher–but we should not submit to the pull of safetyism (overestimating danger, fetishizing safety, and not accepting any risk), which deprives kids of some of the most valuable experiences in childhood.