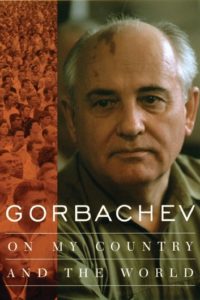 I came across this book amidst my own growing curiosity about the circumstances, history, and impact of the existence of the Soviet Union in the 20th century. I expected an accounting of sorts from the last leader of the USSR, not only of his time in office but of the revolution, the genocidal outcomes of Stalinism, and of the world that was left in its wake. This book met some of those expectations (Gorbachev plainly and openly admitted where the Soviet system had failed, the evil that had persisted through Stalin’s reign), but it included a substantial section on his outlook on the world heading into the 21st century which I found inspiring and as relevant today as when the volume was written (1999).

Perhaps most valuable to me in terms of what I was hoping to get out of the book is a digestible explanation of what happened in the last few years before the collapse of the Soviet Union. I feel like I understand the sequence of events in much clearer detail now, and I can’t help wondering (as I’m sure Gorbachev intends) what the world would be like today if Perestroika had been allowed to accomplish what it set out to do. I can’t help but think of the tragedy of Russia (and the former Soviet republics) having seemingly missed an opportunity to democratize in a much more orderly way without significant opportunities for corruption and ill-gotten wealth in the process, which seems to have unfortunately been the case.

A highly recommended read for anyone lacking an understanding of the broad strokes of the history of the Soviet Union, and a very first-hand account of its dissolution.

The Soviet Union, in the final analysis, experienced its tragedy because democracy was suppressed as a matter of principle over a long period of time.

Humanity cannot be simply a community constantly seeking to survive; sooner or later this approach will lead to catastrophe. It must become a community of progress for everyone–for North and South, East and West, for countries that are now highly developed as well as those that are relatively deprived.

A return to age-old, spiritual, moral, life-affirming values, to a humanist and genuinely optimistic worldview is one of the decisive tasks of our era. It is a universal human task. A global one.

The twenty-first century and the entire coming millennium will be an era of universal tragedy if human solidarity does not gain the upper hand over the widespread contempt for the human race itself and the indifference to the fates of millions.

For the first time in history we face the challenge of defending human existence itself, not just saving the lives of individuals or nations.

Marx’s formula that revolutions are the locomotives of history was very much in vogue for a long time and remains so even today. Nevertheless this formula is worth rethinking. Have revolutions really been the locomotives of forward or upward movement by society? Or have they been extreme solutions to situations in which the ruling powers were incapable of solving problems that had come to a head while the masses were no longer able to endure the existing situation?

The human race today is spending enormous resources to provide the means of existence, even the most basic ones. The quantity of resources being expended is growing because human needs are constantly expanding and are even being artificially cultivated. This is occurring at the expense of resources that are increasingly necessary to solve other vital tasks, tasks that are being posed with ever increasing urgency. This is an abnormal development.

I am convinced that the world today would be living more peacefully if the Soviet Union–of course in a renewed and reformed version–had continued to exist.

Practice has shown that the UN has functioned most efficiently when all its members–certainly not just the permanent members of the Security Council–demonstrated unity of will and intention, and sought to achieve specific, realistic goals. This is exactly what we should strive for today.

Let us establish, under UN auspices, a kind of permanent worldwide brain trust (or “council of the wise”). This would consist of people having no government duties and who are free of any ideological or other preconceptions or prejudices, people who are capable of objectively evaluating the new phenomena in world developments and translating their conclusions into practical recommendations.

One Reply to “Gorbachev: On My Country and the World”