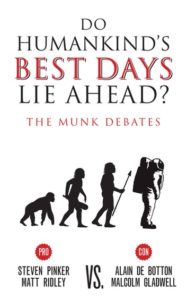 I’ve greatly enjoyed these short quick written accounts of the excellent Munk Debates series that has taken place for the past decade or so here in Canada. Each “booklet” containing a written transcript of the debate also includes pre-debate interviews with each of the speakers, and some analysis by experts in the area of the debate’s subject matter. One aspect of the debates I also find quite interesting is the pre-event and post-event polling (for comparison sake)conducted with the audience at Roy Thomson hall.

So the topic of this debate (Do Humankind’s Best Days Lie Ahead?) is a bit of an interesting way to frame where we sit in the history of the human race. I found myself open to the arguments of de Botton and Gladwell (the “against” camp), but found myself firmly supporting the position of Pinker and Ridley (the “for” camp). I think it is possible to remain optimistic about the future, and especially of the fundamental motivations that power humans through their existence (and their outcomes at scale) while recognizing that our flaws also perpetually condemn us to certain amounts of conflict, irrationality, and waste.

Worth pausing and considering for a moment is the Petrov incident invoked by Gladwell to illustrate exactly how closely humanity has come to the brink of total annihilation. The fact that the entire species continued existence was determined by the decision of one man not to react to a false report of an incoming attack is terrifying and humbling. At the end of the day though, I’d like to think that civilization learns from experiences like these, and that on the whole we are all rowing in the same direction, despite substantial volatility along the way.

A good quick read that raises some interesting thoughts around our future, and the unique time in human history that we have been living in for the past century or so.

By trying to highlight the most important issues at crucial moments in the global conversation, these debates not only profile the ideas and solutions of some of our brightest thinkers and doers, but crystallize public passion and knowledge, helping to tackle some global challenges confronting humankind.

Information about the Munk Debates  |  Link

I think many of the worst movements in history have been born out of the minds of people who believed in perfectionism — scientists, politicians, and others who thought that we could straighten things out, once and for all. And this is an incredibly dangerous philosophy of life. The perfectionists amongst us are those who very often ruin and wreck the world. And true human progress is often the work of people who are much more modest, who accept their own flaws and the flaws of others, and are not attempting to make a paradise on earth.

We think this world is a “vale of tears,” a “slough of despond” compared with what it could be — and will be in the future — if we do the right things. I’m not an optimist by temperament, but by evidence. That’s what changes my mind. We’re not saying, “Don’t worry, be happy.” We’re saying, “Don’t despair, be ambitious.”

And the story that always stays with me and I think bears repeating this evening is the story of what’s known as the Petrov incident.

Recently, the epidemiologist Hans Rosling gave a thousand people a series of multiple-choice questions on population, literacy, life expectancy, and poverty. He noted, “If for each question I wrote the alternatives on bananas and asked chimpanzees in the zoo to pick the right answers, they would have done better than the respondents.” The reason was that the respondents consistently picked answers that were too pessimistic.

The cure for cognitive fallacies is data, and the trend lines are unequivocal. On average, people are living longer, healthier, richer, safer, freer, more literate, and more peaceful lives. While past performance is no guarantee of future returns, the world is not Wall Street. We are unlikely to wake up one morning and face a world with smallpox, slave auctions, or surgery without anaesthetics.

Optimism is a self-fulfilling prophecy, so is pessimism. The progress we enjoy is not the result of some mysterious historical dialectic or law of inevitable progress or arc bending toward justice. It is the result of people spotting problems, including fragility and nuclear proliferation, and instead of moaning that we’re all doomed, applying their ingenuity and their efforts to solving them.

As Thomas Babington Maccaulay said a long time ago, in 1830: On what principle is it that with nothing but improvement behind us we are to expect nothing but deterioration before us?